Are You Ready to Own Your Home in 78251? Want to Learn How To Buy a Home, Even With Low Credit Scores?

Stop Wasting Your Money on Rent.  Download our guide to get the best home loan program, even with low credit scores.

Get My FREE Home Buying Plan 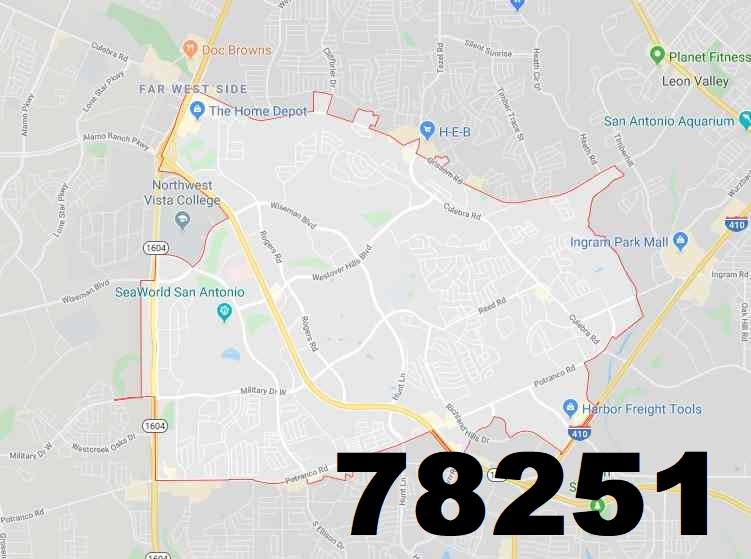 Buying A Home Is Easier Than You Think

Over 28 years of Experience in Helping Families Achieve Their Dream of Home Ownership, Even With Damaged Credit.  Good Credit or Bad Credit, our “Credit Improvement Program” can help you.  With over 12 Different Home Buying Programs, we can help find you the best option.

Our Guide Will Show You How We Can Help You Get There or have one of our Credit Improvement Experts walk you through the process and help along the way.

Get My FREE Home Buying Plan

If you’re looking to purchase a home in the 78250 zip code in San Antonio Texas then you’ve come to the right place.   78250 is located in Northwest San Antonio which is one of the most popular and quickest growing, parts of the city. Homes in 78250 are close to all the major highways and many popular attractions.

78250 is located conveniently between Bandera Road, outside of Loop 410 and stretching West to Culebra and Tezel Rd, stretching almost to 1604.  Bandera road, or Highway 16, is a very active road that starts near downtown and then proceeds for over twenty miles northwest and out of town.  Along the way, Bandera road has tons of businesses, and feeds into a number of major roads and streets.

There are quite a few different subdivisions in 78250 which are all very, very popular.  Some of these are Misty Oaks, The Great Northwest, Northwest Crossing, Quail Creek, The Crossing at Quail Creek, Silver Oaks, Braun Hollow, Northwest Park, North Chase, New Territories, Hidden Meadow, & Tezel Oaks. These are just of the few of subdivisions in the area.

The Alamo Ranch shopping center area is a small type group of shops and stores on the west side of highway 1604 on the western side of San Antonio and Culebra Road it’s actually a 20 miles from the downtown and the Alamo but is only about a mile away from Sea World.  The mall has more than 90 stores including large stores like Target, JC Penney’s, Best Buy, Lowe’s, and Home Depot.

The entire area used to be a real cattle ranch.  It has now been developed into a master planned community known as the Alamo Ranch Area.  There are still many areas that are undisturbed with it’s original landscape and wildlife.

Many houses for sale in 78250 are close enough to see and sometimes even hear the nightly fireworks from the SeaWorld San Antonio theme park.

The Shops at La Cantera

Supportive and very helpful since the day we walked in to meet them, til the day we stepped foot in our home! From rebuilding our credit, to coaching us on do's and don'ts ! These guys are seriously a one-stop-shop! Extremely satisfied and appreciative for all their hardwork! Raymond S.Success Story - 2017
We were very worried about not being able to get into a house because of my student loans and Vanessa and the people at Help For Home Buyers/First Choice Lending helped us not only to clear the way to get the loan we needed but also made the home buying process easy and without issues. They are a great group of people who are very knowledgeable and willing to go the extra mile for you! I would and will recommend them to everyone i know who is looking for help. We are now moving into our dream home and cannot be any happier!! Thank you so much for everything!!

Chris G.Success Story - 2014
This company helped me buy my first home! The team is so amazing put up with my picky self to pick the right house for me and my son! I will 100 % recommend to everyone! Thank you so much for helping me in this beautiful journey! Christina T.Success Story - 2014
We are so happy in our new home!!!! Thank you everyone for everything you have done for us. We are truly blessed to have found you guys! Is Your Credit Keeping You From Owning A Home? Don't Think You Can Qualify? Well Let Us Show You How..

Get A FREE Home Buying Plan

I'm Ready To Become The Next Success Story